Have you ever shut off your dishwasher, shower, or toilet and noticed a loud, knocking sound in your pipes? Chances are you just heard the initial precursor to the water hammer effect. A water hammer, especially when left untreated, can cause damage ranging from minimal to dangerous.

We’ve compiled a comprehensive guide to help you understand the water hammer effect more thoroughly, along with potential causes, solutions, and preventative measures you can take to combat water hammer.

What is a Water Hammer?

Water hammer is the more commonly known term for the phenomenon called hydraulic shock or hydraulic surge. The water hammer effect results from a water pressure surge in your pipes, often occurring after an abrupt direction change, burst from a previously clogged pipe, or a sudden valve shutdown from within the plumbing system.

The backup causes a clamoring noise, much like a hammer does as it pounds against an object, hence the commonly known name, water hammer.

The water hammering effect is a fairly common problem. It happens when a pipeline system shuts off too abruptly. The valve shuts too quickly for what's already rushed through the system to withstand. This phenomenon leads to a buildup of pressurized water.

Since the water continued to surge at full capacity, it hit the closed valve — like hitting a brick wall. When the water makes an impact on the valve, it sends a shockwave through the pipe system.

Hydraulic shock can also occur when the water buildup has to make a sudden direction change, such as a curve in the pipe. When there’s an accumulation rushing toward a direction and must make a sharp turn, it may result in the water hammer effect.

The effect doesn’t only occur to water-centric pipe systems; it happens with some gas or steam systems too. In these systems, a water hammer results from condensation accumulation.

As the condensation grows, it becomes more hazardous as the resulting slug travels at the same standard steam speed. However, because the condensation is denser and closer to a solid, requiring a lesser traveling speed, it will create a more substantial impact.

How Do You Know if You Have a Water Hammer?

You may not think anything of this phenomenon at first, but you’ll most likely notice a loud hammering or thumping noise as if banging pipes together. The sound is the shockwave from water buildup hitting the closed valve and the pipes trying to absorb the impact.

When you run your water system whether a sink, shower, hose, or what have you, you won’t hear any sound other than the smooth rushing water flowing through the plumbing system. If you hear the loud thud or banging pipes in your walls, you most likely have a water hammer.

What Happens if You Don’t Fix a Water Hammer?

You may not think anything of the knocking noises at first, but the sound it makes is just a precursor to the damage it can cause, even after just a single occurrence depending on the state of your plumbing system. 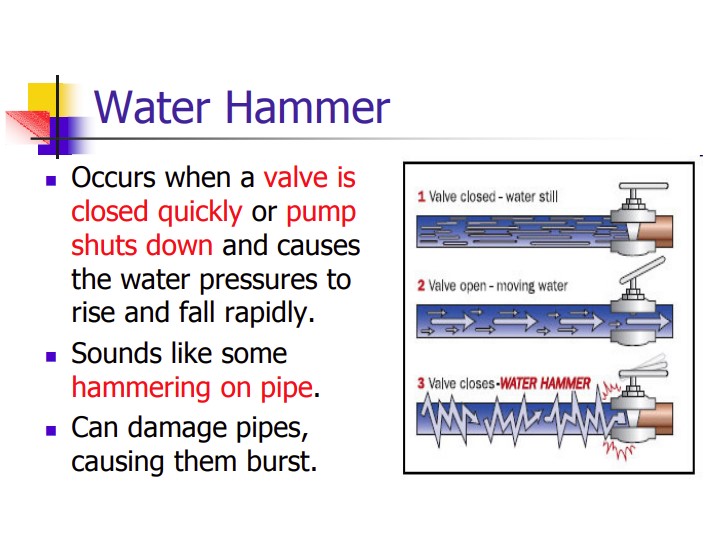 A blown diaphragm also results from the immense pressure that accompanies the water hammer effect. In a pressure tank, the diaphragm separates air and water. When the diaphragm blows, the pressure system cannot regulate water flow, meaning you might get stuck with a constant water flow.

Pipe joint gaskets were not built to withstand high-pressure levels. When a water hammer occurs, the gaskets may weaken or spurt leaks as a means of absorbing the effect’s shock.

Over time, the water logjam can slowly work away at the pipe system. The condensation or water can weather and erode the pipes making them weak and thin the materials allowing for leaks. Erosion can also weaken the joints where pipes are joined together making them unstable and giving them the potential to burst literally at the seam.

Yes. A water hammer can cause a pipe rupture which results from a break in the pipe system. This effect occurs if the pipe is not equipped to handle the pressure and instead ruptures or bursts. This can also happen when the pipe joints weaken from the pressure of the hydraulic shock.

The water hammer sound comes from the physical pipe vibration. If the pressure is too great and the pipes too weak, the vibrating can result in banging pipes that are more likely to burst. A pipe rupture or burst is one of the more extreme, dangerous causes of a water hammer.

How to Fix Water Hammer

Once a water hammer occurs, it’s not irreversible. There are a few solutions you can implement to fix water hammer, such as calling a professional to assess the situation. You can also replace your pipes with a stronger, more durable alternative and/or consider changing the type of electric valves if they are part of your system.

Do Not Ignore the Problem

A water hammer may just sound like knocking pipes, but the sound is just a signifier of the damage happening within the system. If you notice the sound, do not carry on as if it will go away on its own, chances are it won’t. Instead, check out the pipe system and your pressure tank for damage or water hammer signs.

From there, you should call a plumber or other professional to assess the damage and required solution, which may be more complicated than you can handle on your own.

Water hammer may result from a less than adequate pipe system. If a water hammer occurs, one solution is to replace your pipes entirely with ones that have more support, high-quality materials, air chambers, and no slam check valves.

A common valve used in systems prone to water hammer are electric solenoid valves. These are great options for quickly opening and closing valve ports, but that also leads them to be more susceptible to water hammer. If your system does not need to immediately stop the flow of water or other media, an electric/motorized ball valve could be a better option. Electric ball valves open and close slower than a solenoid valve, which prevents the liquid or gas from building up pressure so quickly in the pipes.

It’s one thing to learn how to fix a water hammer if it occurs, but you can take your measures a step further in learning how to stop water hammer from ever happening. Preventing water hammer involves a little check-up on your pipes and making sure they are in pristine condition so that the effect never occurs. It also involves implementing new materials and valves to minimize the chances.

If your pipe system is weak or sagging, it may be prone to pooling. Pooling is when water accumulates in the lower portions of the pipes. When the pressure flows through the system, this water slug from the sagging pipes can result in the water hammer effect. You can install a support system to combat this potential hazard and keep your pipes sturdy.

Most pipe systems should come with an air chamber, which provides a little bit of cushion between water and the valve to absorb shock and pressure from the water flow. Pipes without air chambers may succumb to the water hammering effect more easily. Check your pipes and have a system with air chambers installed to prevent the water hammer effect.

One of the water hammer's causes is shutting a valve too quickly. You can get no slam check valves installed to prevent any abrupt shutting, thereby reducing the likelihood of a water hammer.